I had a big first recently! 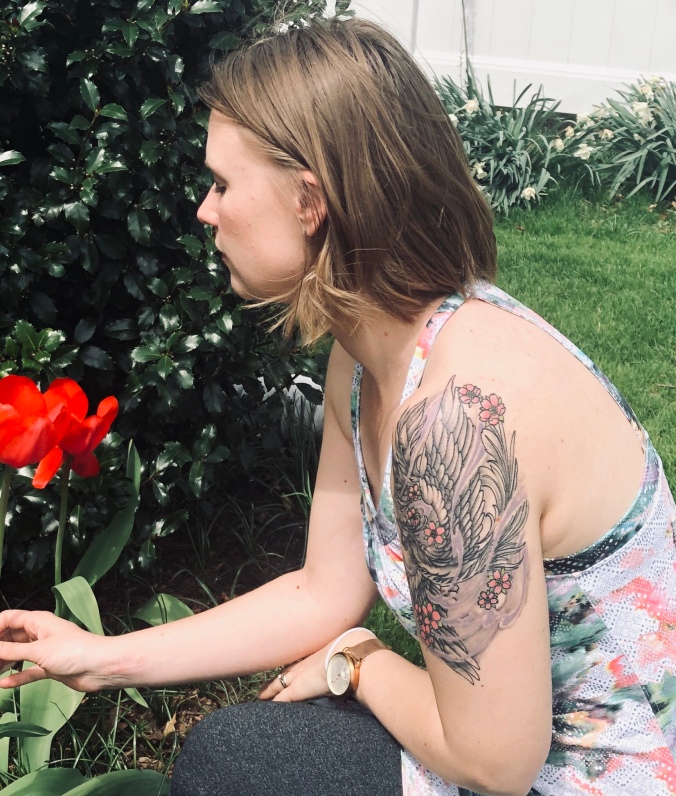 Yes, this is my first tattoo! I know, I know it’s huge for my first one. But I love it!

I have thought about getting one for a while. But the timing was never right. You’re really not supposed to get them when you’re pregnant. Basically, I have either been, pregnant or poor… one precedes the other. And round and round it goes! Haha!

However, the timing was right this spring. After I had Ava, Daniel and I talked about getting tattoos in Ava’s memory. I loved the idea.

Daniel knows how picky I am. Apparently I’m “bougie” … Side note, I learned this new word from my young adults. I’m told it means you like ‘nice’ things. Or ‘fancy’ things. I mean let’s be real I only have a few areas this applies… ok… maybe more that I would like to admit. But a really good tattoo artist was definitely on my list!

That put Daniel on the hunt for a good one, preferably one that does Japanese art well. You see, years ago, back when Daniel first started getting tattoos, I started to think about what kind of tattoo I would want. I settled on a Japanese Phoenix. I just thought they looked so cool, and I loved the coloring and the art.

And then Ava just confirmed that choice. You see, Ava’s name means both ‘bird’ and ‘life’, so getting the Japanese phoenix seemed like a perfect fit.

This was just one more of many things, that fell into place that have deep meaning to us surrounding Ava.

The Japanese phoenix, the tattoo that I had been dreaming about getting for so long.

To our surprise, one of the best tattoo artists in the area has a shop walking distance from our house. I had seen this place numerous times, it’s right across the street from my bagel place! (For those of you not from this area, EVERYONE has ‘their’ pizza place, and ‘their’ bagel place.)

Walking into this guy’s shop… man… maybe it was all the young guys with their beards, or maybe all the tattoos and the laid back attitude. Whatever it was, I felt like I walked into a place in Seattle. It transported me back to hanging out with all the guys in the music scene, when Daniel was in his band. It was pretty awesome.

The shop, the taste of nostalgia, it all just helped Daniel get bit by the bug again and he is more than excited to get going on the rest of his sleeve.

Before I go any further, I feel like I should answer the question that is on most of your minds. Or at least the most common one I get asked. Especially since I have a pretty high pain tolerance.

Yes, yes it does! Ok, ok! It’s not like childbirth or anything. I got it on my shoulder which is a less painful area. I was expecting it to be an annoying pain. But it was more than that, and it depends on how long the session is too. I think if I had been done in an hour and a half or something it would have been easier. But as the hours tick on… you start to feel pretty raw. However, it’s totally worth it!

I gotta say, it was really fun to go with Daniel and get these matching tattoos.  I’m biased, but I think they turned out beautiful. 😉

Mama to five boys and 1 girl in heaven. I am also the wife of a pastor. I’m originally from the Pacific  Northwest, but God has called our family to the east coast, we now live in North Jersey, not far from NYC.

Life is busy, tiring and beautiful. I love my savior, redeemer and friend Jesus. And I love to share about how He is continuing to grow me and my family as we serve and walk with Him.